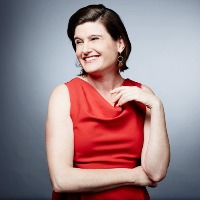 If I've learned nothing else in my years of reporting it's that everyone has a story to tell.

For more than a decade, I wrote longform narratives, profiles, first-person pieces and more at CNN Digital. This followed a number of years in newspapers, where most of my time was spent at The Salt Lake Tribune. Along the way, I've been recognized with awards and various fellowships.

My interests are vast, but by virtue of designated beats and needs I've often been drawn to stories related to women, health, faith and quirk. Now, as a freelancer, the doors are wide open -- and I'm excited to explore the writing possibilities both inside and outside traditional journalism.

I'm a proud native of Detroit, but I bounced around the country and globe before putting down roots in Atlanta, where I live with my husband and a goofball mutt named Yogi.

Since leaving CNN at the end of June 2019, I've done some freelancing, spent a few months ghostwriting a book proposal, explored several podcast ideas and revisited some passion projects that have been on the back burner for too long.

Below is a broad sampling of my published work, including freelance pieces that appeared in Smithsonian Magazine, The Washington Post, The Atlanta Journal-Constitution, AARP.org and The Forward.

Paulette Leaphart was the perfect hero: a cancer survivor baring her double-mastectomy scars on a 1,000-mile walk to Washington. But then her own words got in the way.

Liberated 70 years ago, only a fraction of the prisoners at Auschwitz survived. Beaten but not broken, they built new lives, new families. But wartime scars changed them -- and their children -- forever.

Aesha's story of torture by the Taliban made her the iconic face of the oppression of women in Afghanistan. The world reached out to help, but the fairy-tale ending everyone hoped for has proven elusive. In this exclusive report, CNN's Jessica Ravitz documents the inspiring -- and beguiling -- Aesha and her nearly two-year quest for surgery, stability and a sense of belonging.

Wineland, 21, captivated millions of people around the world with her honest talk about illness and mortality while living with cystic fibrosis.

Inside the secret lives of functioning heroin addicts

They're not slumped over in alleyways. They haven't lost everything. They are the heroin addicts living next door and fooling their families.

STORIES FROM ACROSS AMERICA

Their dad killed himself on the farm where he was born. They hope his story will save others

Rural suicides outpace those in urban America, and Montana's suicide rate leads the nation. One farming family in north central Montana shares their story of loss in the hopes that their anguish can save others.

Where Trump support and Obamacare use soar

Grant County, Nebraska, has the highest rate of Obamacare enrollees in the US. It also voted overwhelmingly for President Trump. A disconnect? Not to residents.

Can forgotten rubella children of the '60s hold clue for Zika babies?

Pregnant women infected with the rubella virus, or German measles, during a 1960s US epidemic, gave birth to babies with multiple birth defects. More than 50 years later, their children still need care.

What one Charleston girl can teach us about racism

For 16-year-old Tre'anna Shaw, the church massacre was personal. So is the debate about the Confederate flag -- and how her nation grapples with race.

Town devastated by fertilizer explosion is guided by the West way

Next to the 24-hour Czech Stop off I-35 in central Texas, travelers line up to get a taste of the pastries and breads that define this community. But to really know West, a small town catapulted into the news last week, you have to venture about half a mile east. There, past the Ole Czech Smoke House selling sausages and the flags flying at half-staff, the people tell the story.

Back to the beginning: The sweat lodge ceremony, as intended

'I had an abortion': Shunning politics, finding a voice

A Boston-area pastor stood in a church parlor talking about abortion -- her abortion. By speaking about a subject so many deem unspeakable, she empowered others to come forward. She says it's always this way.

The sacred land at the center of the Dakota pipeline fight

Corporate greed and potential environmental disaster are arguments against the Dakota Access Pipeline. But a big issue for the Standing Rock Sioux and other Native Americans is the threat to sacred land.

The spiritual community that wowed the world with its forgiveness comes together and celebrates history -- both recent and past.

France has the largest Jewish community in Europe. But the Paris attacks, amid rising anti-Semitism and increased immigration to Israel, may take a toll.

A rabbi, a Mormon and a black Christian mayor walk into a room...

If the friendship between a black Christian mayor, a rabbi running for Congress and a Mormon university president wasn't so real, this would sound like a bad joke. Instead, it’s a reflection of how three men from profoundly different backgrounds met 20 years ago, connected and changed one another.

For Muslim family, faith complicates grief for loved one lost on 9/11

Mohammad Salahuddin Chowdhury was one of 32 Muslim victims on 9/11. He left behind a daughter and a pregnant wife, who gave birth to their son two days after the Twin Towers fell. If there were a roadmap when it comes to grieving, the family's journey since then was unmarked.

Mitt Romney has been deeply influenced by his experiences as a Mormon. CNN.com's Jessica Ravitz explains.

Road trip to the end of the world

If you thought you had less than three perfectly healthy months to live, what would you do? This group of faithful ambassadors hopped in a caravan of RVs to warn people about the end of the world.

SOMETIMES I GET PERSONAL

It's been a Hindu holy spot for millennia and a spiritual playground for Westeners since the Beatles put it on the map. CNN's Jessica Ravitz came to Rishikesh to try her hand at everything it offers. What she didn't see coming: How this place and its people helped her find wholeness.

Honoring the soundtrack of my mother's life

As my mother lay dying last September, we surrounded her with song. Music had filled her life and often our household. Now it became our way to connect with her, when her deteriorating brain allowed for little else.

We were 20-somethings, living in Israel, searching for where we fit in. The promise of peace hung in the air until a gunman changed everything.

THE TOLL OF GUN VIOLENCE

Three bullets hit Rachel Sheppard when a gunman opened fire on a music festival in Las Vegas. A stranger and a woman she barely knew saved her -- and changed them all.

The forgotten victims of gun violence

When children are killed by guns, the voices of the young brothers and sisters left behind are seldom heard. Theirs is the untold story of this American tragedy.

Two parents, one gun and a crusade in the name of Brooklynn

Brooklynn Mohler, 13, died when her best friend unintentionally fired a gun that wasn't safely stored in her home. Mohler's parents are fighting to save others.

MY WORK ISN'T ALWAYS SO HEAVY

'I'm the original voice of Siri'

Susan Bennett of suburban Atlanta says she is the voice of the original U.S. version of Siri on Apple's iPhone. CNN's Jessica Ravitz wasn't looking for Siri when she found her by chance.

They got Hoffa-ed: Lives turned upside down in search for Teamsters boss

Four decades after Teamsters boss Jimmy Hoffa went missing on July 30, 1975, the search for his body lives on.

Meet the Gnomist: A force for good

She created a magical forest in a Kansas suburb. Her artistry touched the lives of others and sparked a short film. But who is she and what's she up to now?

The fight for the Equal Rights Amendment began decades ago. Activists now see the finish line.

Bills are being introduced in state capitols to ratify the Equal Rights Amendment, an addition to the US Constitution to protect women's rights and prohibit discrimination on the basis of sex, according to proponents.

They had abortions late in their pregnancies. These are their stories

Women who've had abortions later in their pregnancies are "bonded in a sisterhood through a club nobody ever wanted to be a part of," one woman said. Strangers have called them monsters, trolled them on social media and said their living children should be taken away.

Signaling a new chapter in the battle over abortion access in the United States, a European organization is providing Americans a way to get doctor-prescribed pills by mail to medically induce abortions at home.

Decades after their own sexual assaults, women put themselves in shoes of Kavanaugh's accusers

Decades-old allegations against Judge Brett Kavanaugh have introduced a new chapter in the #MeToo movement. Some women are thinking and talking about their own sexual assaults for the first time in years. And they're asking themselves if they could come forward.

A gay couple wanted a family and, with the help of two women, had a son. When a storage tank holding frozen embryos, or future siblings, failed in San Francisco, the outcome touched them all.

The abortion travel agent and other tales from Texas' new desert

The effects of a Texas law before the U.S. Supreme Court have already been felt: Clinics across the state have closed, leaving many women in an abortion desert.

Nursing homes are ground zero for the pandemic, and each resident, family and worker connected to these facilities has their own story to tell.

Hoke Edward "Ed" Benton is part of the first generation of people with Down syndrome who are reaching old age. But their newfound longevity is ushering in a host of challenges, including higher rates of physical health issues and dementia. As they begin to outlive their parents, many families are grappling with devastating questions: Who will care for them? And how will they pay for it?

These Scientists May Have Found a Cure for 'Bubble Boy' Disease

Approximately one in 40,000 to 100,000 infants is born with "bubble boy" disease, a rare genetic disorder that leaves patients without functioning immune systems. A simple cold can be deadly. Research scientists at St. Jude Children's Research Hospital in Memphis, Tennessee, may have discovered a cure.

Honoring the Legacy of Brian Sorrentino

Brian Sorrentino, a hematologist and gene therapy researcher at St. Jude Children’s Research Hospital in Memphis, Tennessee, made it his life’s mission to cure a rare disorder known as the "bubble boy" disease. His widow reflects on his pioneering work and her late husband.

Perspective | The Daughterhood Circle: Where family caregivers come together to find community

While new mothers are showered with love and often share a path well-lit by friends and neighbors, the road is often dark and hard to navigate when it comes time to mother their own mothers, or any relative, for that matter. But there is some help.

In Atlanta, the anti-Semitic flier wasn't real. The fear was.

On Monday, the Atlanta Jewish Times published an article about a flyer - featuring swastikas, a rat adorned with a Star of David and language denying the Holocaust - supposedly distributed in the city's Orthodox neighborhood. On Tuesday, the story was debunked.